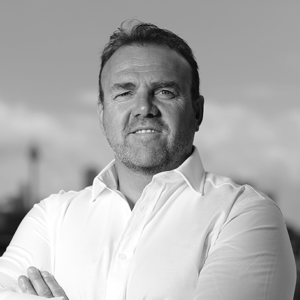 Marinos has also served as National Teams Manager, Acting Managing Director, and General Manager for Commercial and Marketing during his time at the South African Rugby Union (SARU) from 2008 to 2015.

A former professional Rugby and Rugby League player, Marinos played for the Newport-based club 97 times and went on to represent Wales in eight Test matches.  He also played for the Natal Sharks 1991-1995, Western Province and the Stormers 1197-1999, and represented Wales in Sevens on the World Series and the RWC

Marinos also played Rugby League in Australia, having featured in one match for the Canterbury-Bankstown Bulldogs in 1996 as well as representing South Africa at the Super League World Nines in 1997.

Having moved himself and his family to Sydney, Marinos considers himself a proud migrant Australian.

Andy Marinos is a Member of the Champions of Change Sport Group established in 2015. The Sport Group includes leaders from every major sport in Australia, and of some of Australia’s most successful sporting clubs. The group is focused on advancing women in leadership, pay equality and creating safe, respectful and inclusive sporting environments.